A few days into March I decided that, for the remainder of the month, I would only listen to music created by women. We’re a week into July now and I haven’t gone back yet. 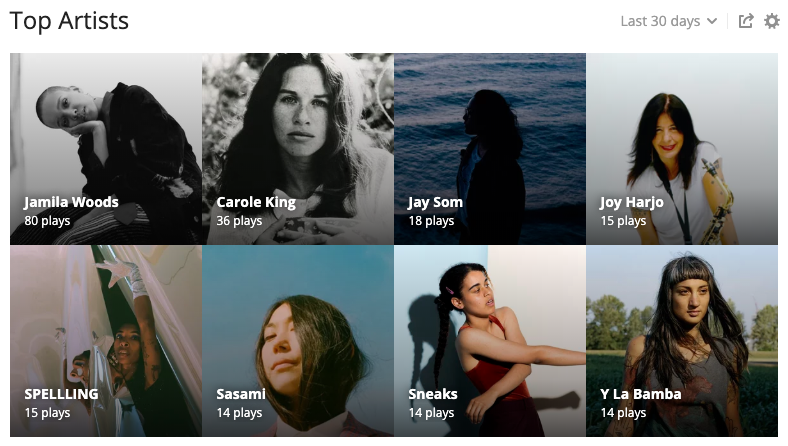 I had a rather unfortunate first inspiration for this project. The thought started initially as I was trying to determine if I ever could or should listen to his music again, since he had been one of the artists up next in my discography listening project and in the dim past of the 2000s was a pretty important artist to me.) But this article and especially this thought quoted in the article


I mean, there's a good chance you never heard what would have been your favorite band.

gave me pause, and made me rethink and question the importance and legitimacy of my little dilemma over whether to listen to music made by a terrible person.

I obsess over my music listening history, and in the past year or two I’ve done pretty well at parity between male and female artists in my listening habits. But after thinking on these things I took a serious look at the ratios in my iTunes library and my old CD/record collections, and they were straight-up horrible. I realized my habits and unconscious default in music-listening was still very much to turn to male artists, and I was sure I was missing out on a lot by not consciously looking for more women musicians, both new and long-established artists.

After listening to it a couple of times I started looking around for reviews and they were scarce. It seemed like there was a really weird lack of attention for an album of this calibre. I couldn’t help but think that if this exact set of songs with the same arrangements and production had been put out by a man, someone like Bruce Springsteen, Beck, Robert Plant (who does background vocals on a couple of tracks here), or for ultimate argument’s sake let’s say Ryan Adams, it would be hailed as “career-defining,” “return to form,” album of the year, 5 stars from Rolling Stone, Grammy buzz, all sins forgiven, big tour, &c. But hardly anyone was talking at all about this phenomenal album, and it seemed increasingly probable to me that this might be simply because it was created by a woman rather than a man, and therefore wasn’t thought of in that same way by many critics and fans of this type of music as made by men.

I love a good music challenge, so the decision was easily made. At the time, early March, I was working my way album-by-album through the Outkast discography, which I was committed to completing and, frankly, I was enjoying way too much to even consider putting aside. (Hot take: one of the strongest six-album runs in all of recorded popular music.) Around March 10, 2019, after finally listening to Idlewild for the first time, I took a rest from listening to music made by men.

I started immediately with Janelle Monáe, and honestly this was partly because she showed up on several tracks on that last Outkast album and was the most Outkast-ish female artist I could think of at the time. (Not listening through Outkast’s catalog again was my only actual sacrifice for this endeavor.)

But then I started digging. I discovered Sister Rosetta Tharpe, criminally overlooked by all the ‘History of Rock and Roll’ and American roots music syllabi, books, and documentaries I have encountered in my life up until now. I’m positive she wasn’t mentioned in the lectures or textbook of my college History of Rock and Roll course in the early 2000s. She is absolutely essential, though:

I tried several of Patty Smith’s albums for the first time. Now that I’ve finally listened to her it seems like everyone else in the world already knows about Patty Smith, but even though I’ve dug into rock and punk history at various points in my life both officially and casually (most notably in the aforementioned college-level History of Rock class), I was always allowed to ignore her. I found her first two albums revelational and possibly the best, key parts of 70s New York punk, not just the token woman spouting off some random poetry over guitars that my music professor made her out to be without even bothering to play any of her music for us. (Actually, “spouting off random poetry over guitars” sounds like a perfect description for potentially peak rock and roll, now that I think about it. I’ve long been an idiot for skipping on this.) It’s now clear to me that many of my favorite musical artists, male or female, would not exist as they do without Patty Smith - she’s foundational to post-punk and so much more. For example, a random track on her fourth album sounds like the whole future discography of R.E.M. distilled and prophesied in a single song.

I intended to go through Kate Bush’s discography, but after trying her first album it didn’t really stick. (I’ll probably still go back at some point.)

I crawled through new release playlists and mostly skipped the male artists. I came across Mereba, a great find.

I became obsessed most of all with Titanic Rising by Weyes Blood; I’ve listened to it at least 10 or 20 times now, but I guess not in the last few weeks.

The newer artists I probably would have found and listened to regardless of whether I was doing this project, but even in that case it gave me permission to really focus on them and listen to them multiple times in a way I might not have otherwise, if I’d been letting my listening time be taken up with so many men.

At the end of March, I figured I should make it a full month, so I decided to continue on to April 15. Then the middle of April came and went. If a male artist came up on a playlist or on the radio it was okay, but whenever I was making a conscious choice to listen to something it was still always going to be a female artist, or at least a band led by a woman. It just became a habit, and I liked it.

LEGACY! LEGACY! by Jamila Woods has been my latest obsession throughout June and is my current AOTY. This album could be and likely already is the basis for an entire curriculum, a much more worthy curriculum than the one I encountered in that History of Rock and Roll class mentioned above. Rather than write more myself I’m just going to point you to some good things that others have said about it, as well as what Woods says about it herself.

Some of these artists and albums were new to me, but many were old, long-standing comforts that I’ve just allowed myself to listen to again and again these past months. Maybe that’s why it has been so easy to just continue with my women-only listening program. We’re now a week into July, and I haven’t stopped yet. I haven’t even listened to the new Vampire Weekend, which this post tells me I could perhaps somehow justify because it actually includes occasional collaborations with some female musicians. (That article is so weird to me, by the way. In one sense I like that it brings light to a heartening trend. On the other hand, how about more articles just about female musicians themselves, rather than how awesome the veteran indie dudebros are for finally bringing a few female voices into their projects 10 to 20 years into their careers.)

What Have I Learned?

I thought I already knew better, but keeping myself focused exclusively on women artists for so long made me finally become more fully cognizant of the weird, incorrect ideas inculcated in me as a 13-year-old boy trying to learn about music and make his way in the adolescent social world: that the default, recognized source for “good music” was a group of white men with guitars, and that music made by women was not for me and listening to too much of it could actually somehow be risky to my perceived masculinity. I think I’ve finally eradicated the last remnants of these pathological thoughts from my system.

So, what now? I think having written up this post I might be able to finally close down the formal listening experiment. At the outset of the project I had envisioned epic twitter threads sharing all the awesome music and musicians I was discovering and exploring each day. That did not happen, and it’s not going to, other than I incorporated some of those thoughts and links above, in this post. Instead, going forward I’ll just have to make sharing neat and unique stuff that I enjoy a more general or daily practice on my part as I go along, not some impossible perfect plan. That’s another post and project, though.

My 5 most-listened-to albums of the last 90 days (last.fm profile screenshot)

Next: I guess I'm finally ready to admit to the world that I have a new website