I’ve decided that I’m just going to start sharing more of my demos, drafts, fragments, and improvisations, so they are out in the world before they become irrelevant, instead of languishing half-finished in my notebooks as I wait for some mythical moment when I will have endless time and energy to create the thorough, perfect thing.

I wanted to write a full essay that thoroughly explores my thoughts about this album, Mesita’s Twitter song project, and how it all is actually impacting my views on life, art, &c., but since I already have notebooks and drives and clouds half-filled half-empty with so many other such good intentions that I never follow through on, I’m just going to post this now, and state that I think that Mesita’s You Are Beautiful is pretty much one of the most honest pieces of art I have ever encountered.

[ more of You Are Beautiful ]

I’m reading Weird Little Robots by Carolyn Crimi and Corinna Luyken to my kids right now, and so far it feels kind of like if Kate Dicamillo had collaborated with Stephen Spielberg on one of his 80s Amblin projects. In other words, I’m enjoying it. And my kids like it, too.

Mesita made me a 5-second song on twitter. I love that he does this and that I finally got the guts to ask for one, and he did it.

[ more of Mesita made me a 5-Second Song on Twitter ] 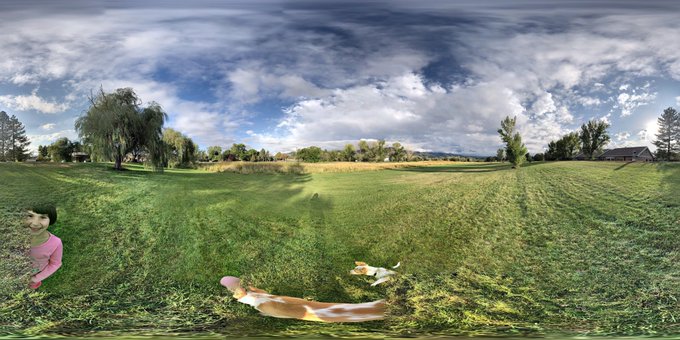 My daughter really wanted to be immortalized as a ghostly figure on google maps so I decided to make this photosphere public. See also: our deconstructed puppy’s detached floating tail.